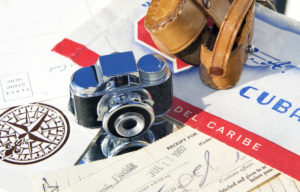 Cuba; the name alone conjures up a myriad of images, none so powerful as the country that is forbidden fruit, especially for Americans of a certain age. So travel to this special place was, and is, an incredible trip.

The truth is, tourism is nothing new to this island nation, and the Cubans work it well. To sit in Old Town Havana’s main square on any given morning, espresso in hand, is to be treated to great theatre. Ladies in traditional dress set up their wares, men hawk cigars (don’t buy these), and lazy dogs and hungry street cats mix with an endless stream of foreigners for whom this dance is done. At night the streets come alive and bars are full to bursting until the wee hours. Set your body clock on Cuban time…

In 2017, on my second adventure to Havana, I travelled with The Pan American Art Projects team, specifically to meet artists in their studios for a very personal look at their lives and work. As in much of Cuban art, history and politics run deep. But what struck me most was the generational divide in perspective, and how themes from the revolution through to globalization surfaced.

The older artists I met, like Jose Toirac, take their inspiration from the events of 1959, when Castro’s guerrillas overtook the government. His life size portrait of the dying Che in black, white and gray pit the man versus the myth and the global brand that he has become. Jose Manuel Fors, on the other hand, dismisses the revolution as ground zero, and meditates instead on the power of memory, and how we construct the past to find meaning in minute details. 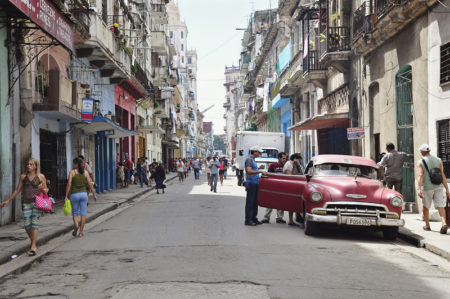 The younger artists I met were savvy, sophisticated, and well-connected within the international art scene. Born and raised in the post “special period” Cuba, theirs is a lighter, brighter place.

Two of the Cuban artists on Sujac Studios have remarkable stories to tell. Both work in wood, paper, and other scrap materials. Abel Barroso’s “Field Launch Site” is a representation of the “Old Cuba” and the “New Cuba,” a land of renewed opportunity, that globalization has brought about. He sees a world reaching out to Cuba, and Cuba reaching out to the world.

Desbel Alvarez’s work, “Habana Libre” is full of irony and wit. The eponymous hotel, which still stands today, was built in 1958 to capitalize on the huge tourism boom from the U.S. and elsewhere into Havana. In 1959, when Castro overthrew Batista’s regime, he took over the penthouse and lived there for a year or so until his luxury home was built. Viva la Revolution!

Sujac Studios – we hope you enjoy the view!