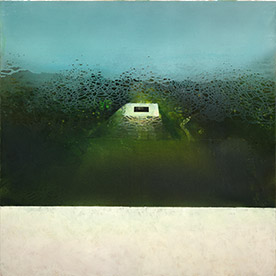 London, England was my home for 16 years. Cool Britannia, Tony Blair, Oasis, “No” to a common currency with Europe, and “drinks” – parties consisting of champagne and cigarettes, are some of the more vivid memories I hold from that time.

It would only be in 2008 when the world was seemingly falling apart that I knew I wanted to return to America and re-discover the familiar. In the meantime, I became a British citizen (no recitation of the Kings and Queens needed then), watched 9/11 unfold in horror from afar, never quite learned cricket, but did learn to speak English.

In the early 2000’s, I discovered a gallery in Notting Hill called Broadbent, after the proprietor, Angus Broadbent. I also found that one weekend of every month I could conveniently pop over to Portobello Road for some of the best street market shopping in the country. There also existed at that time in the neighborhood, a renowned taxidermy store that was a treasure…if you were into that sort of thing! But back to Broadbent…Angus has always had a tremendous eye for talent and a great knowledge of contemporary artists and art. He introduced me to the Swiss German, Pierre Imhoff, and two English artists whose work I own and treasure, Kate Palmer and Luke Elwes.

Through Angus, I had the chance to visit Luke in his studio (a first for me at the time), and it was magical. Luke was born in London but spent several years of his childhood in Persia, Tehran to be exact, where he absorbed the light and space of the desert. His story is a lesson in a life well-lived, and enviable given his resume of travels in search of inspiration. After meeting the writer Bruce Chatwin, Luke went to Australia and studied aboriginal storytelling. He also spent time living in India and Tibet where, I think, his work took on an added spiritual dimension.

Ostensibly, Luke’s paintings are topographical in nature with sand, rivers, scrubs, and green vistas throughout. But there is also a deep calm and serenity that comes through and sustains the eye. I never cease to find his brushwork and style mesmerizing.

We are Sujac Studios – enjoy the view!